How many boys and girls think about being an astronaut? Maybe not as many in the last 10 years as have in the 10 years previous, but I think it would be fun. I know that when I taught Earth and Space science at Faith  Mennonite HS students would always think ‘floating in space’ would be ‘awesome’. 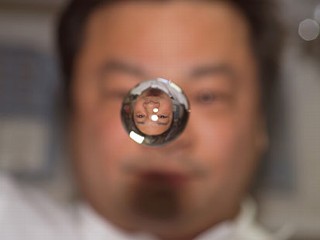 Seeing astronauts floating around effortlessly and playing with floating spheres of water, tossing M&Ms in the air and having them move like a slow motion explosion in mid air while the others floated around trying to catch the like kids in a futuristic, but real, candy scramble has an intoxicating effect on most anybody. So who would not want to be there to play?

Until now I have thought it would be fun too, but this article from the AP has me thinking twice about the playground in space. Lots of playgrounds have water fountains that most of us will drink from, but are careful to not touch the spout and let the water run for a little to ease our unease of the unknown. But after reading
Astronauts tinker with urine-to-water machine I think I will stay on terra firma unless I can bring my own Nalgene bottle.

Plants blogging…what is next? I ‘found’ this while reading about a technology article from the Reuters site. There was a link to a set of photos about technology gadgets and this was mentioned. The Asians come up with some of the greatest and weirdest things, this tops the list. But I am not sure if blogging plants is fun, ridiculous of amazing.

Go Check it out.

Once the lamp activated, the widget shows a real-time view of Midori-san under the light.

Judging from the blog content and the numerous ?thank yous? below the fold of each post, Midori-san seems to really appreciate every chance it gets to photosynthesize.

Does the voting on Facebook ads do anything? I noticed that there is a thumbs up/down icons below each ad. When you click on a thumbs down you can select why you don’t like the ad. The first time I did it the ad was of an immodestly attired women. I voted down and reasoned it was pornographic. END_OF_DOCUMENT_TOKEN_TO_BE_REPLACED

"…you're not old enough to be totally irrelevant but old enough that I can disclaim what you say based on the fact that you're too old to know much at all." -a student